skip to main | skip to sidebar
Welcome to my collection. My topic is birds and I collect mostly covers but I will show you a variety of philatelic material that is part my collection. 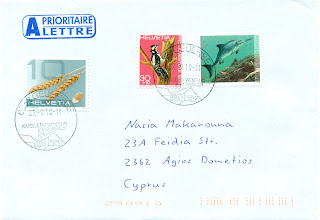 As my previous post was so short I am posting another cover sent from Switzerland. Thank you Vural for it.  The stamps are cancelled with Geuensee's pictorial postmark. The bird stamp was issued in 1970.
Great spotted woodpecker (Dendrocopos major) can be found in northern Asia and in Europe.  It has many subspecies.  It feeds mostly on insects and grubs but when these can't be found, it can also eat fruit, seeds, small rodents, eggs etc. 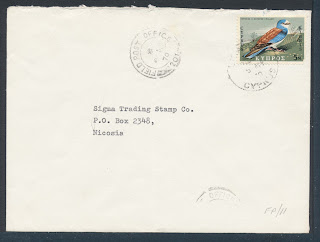 Here is another cover fom Ebay.  The stamp, issued in 1969, comes from the first bird set of Cyprus.  It shows European roller (Coracias garrulus) which was shown before in this blog.  The cover was mailed in 1970 and it has a postmark from FPO 201.
Posted by Nasia at 23:11 3 comments: 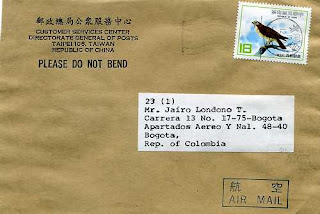 Hello everyone,  I am sorry for my long absence but lack of time prevented me from updating my blog.  Moreover, I managed to break my scanner so at the moment I only have very few covers on my laptop that I haven't already uploaded here.

I bought this cover from Ebay.  It was mailed from Taiwan to Colombia.  The stamp was issued in 1983 and it comes from a set of two.

Grey-faced Buzzard (Butastur indicus): It is a bird of prey found in Asia .  It is a medium-sized raptor which preys on large insects, lizards, frogs and small mammals.  This species is migratory.
Posted by Nasia at 21:32 3 comments: 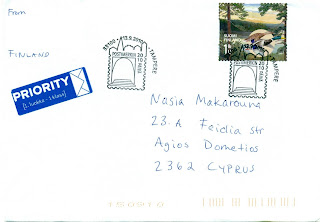 Here is a cover from Finland with a stamp showing a pair of Mallards (Anas platyrhynchos).  This species of dabbling ducks can be found in wetlands in temperate and subtropical Europe, North Africa, Asia and America.  It was also introduced in Australia and New Zealand.  As you can see on the stamp the green-headed male is different from the brown and colour-lacking female.  This species feed on water plants, invertebrates, gastropods, worms etc.  It is migratory. This is my first cover from Italy where bird stamps are used.  It is also my first registered cover from that country.  The set on it was issued in 1995.
Grey heron (Ardea cinerea): It can be found in some parts of Africa and in temperate Asia and Europe.  In the colder areas it is migratory.  It has four subspecies.  It feeds on frogs, fish, insects, reptiles, small mammals and other birds' chicks.
Griffon vulture (Gyps fulvus): This bird of prey lives in Asia, north Africa and southern Europe.  It can be found in Cyprus too.  In the wild it can live for 50-70 years.  It is a scavenger.
Golden eagle (Aquila chrysaetos): I already presented it on a stamp from Algeria.
White-winged snowfinch (Montifringilla nivalis): This species of sparrow can be found in southern Europe and western and central Asia.  It has four subspecies.  It feeds on seeds and insects.
Posted by Nasia at 21:20 4 comments:

Old cover from the UK 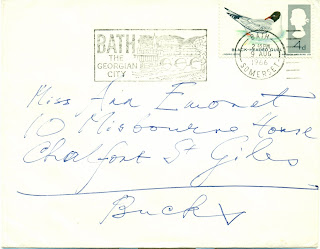 This cover was posted in Bath, UK on the 9th of August 1966.  The stamp used was issued on the 8th of August of that year as a part of a set of four stamps.  It shows Black-headed Gull (Chroicocephalus ridibundus).  This species was presented in an older post.
Posted by Nasia at 23:56 3 comments: 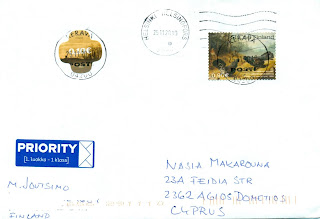 Here is a nice cover from Finland.  It appears to be both hand and machine canceled.  The 2003 bird stamps shows Eurasian Capercaillie (Tetrao urogallus) which I have presented in the past.
Posted by Nasia at 18:45 1 comment:

Thank you Bryon for this nice cover from the USA.  Unfortunately, it appears and it made contact with water during its transportation.  The stamps were issued in 2005 and they are part of the Northeast Deciduous Forest.  One of them is showing Eastern Red Bat (Lasiurus borealis).  I will present the birds only.  From left to right:
Ovenbird (Seiurus aurocapillus): It is a North American Warbler leaving in forests.  It has three subspecies.
Wild Turkey (Meleagris gallopavo): We have seen this species in the past.
Red-shouldered Hawk (Buteo lineatus): It can be found in the USA and in Mexico.  It has five subspecies.  It feeds on small birds, small mammals, large insects, reptiles and amphibians.  Some  of the northern populations migrate to central Mexico in the winter.
Posted by Nasia at 17:57 No comments: 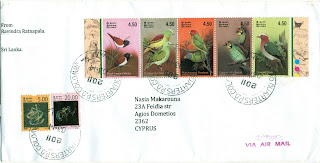 Hello everyone, I am sorry for my long absence from this blog.  I finally found enough time to scan new items and show them here.    Thank you Ravindra Ratnapala for this excellent cover from Sri Lanka.  The bird stamps were issued in 2003 and they are coming from a set of 25 stamps.  From left to right:
Tricoloured Munia (Lonchura malacca): It is a finch native to Sri Lanka and India mainly in wet grasslands habitats.  It has been introduced to other countries too.  It has two subspecies.  It feeds on grain and other seeds.
Pompadour Green Pigeon (Treron pompadora): It is a species of pigeon found in southern and southeast Asian forests.  It has six subspecies although some countries consider them different species.  It feeds on fruit, seeds and plants.
Plum-headed Parakeet (Psittacula cyanocephala): This parrot is endemic to the Indian subcontinent in forests and open woodlands.  It can be found as a pet.
Coppersmith Barbet or Crimson-breasted Barbet (Megalaima haemacephala): It can be found in south and southeast Asia in gardens, groves and sparse woodlands.  It feeds on fruit, berries and insects.  It has nine subspecies.
Emerald Dove (Chalcophaps indica): This species was shown on a cover from Malaysia. 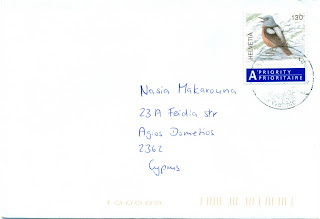 To finish with the covers I have from this set, here is a simple but yet beautiful cover showing Rock Thrush (Monticola saxatilis). The same stamp was shown before.
Posted by Nasia at 23:50 2 comments: 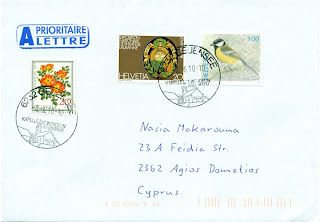 This bird stamp comes from the same 2007 set of Switzerland and it shows Great Tit (Parus major). Thank you Vural from ICCC.
Posted by Nasia at 23:46 No comments: 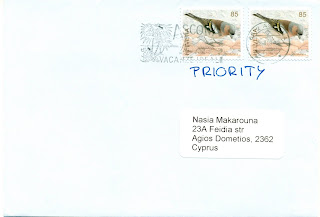 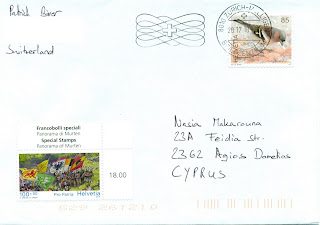 Here are two covers from Switzerland with the 2007 Chaffinch (Fringilla coelebs) stamp. Take notice at the nice machine cancelations. This finch can be found in Europe, northwestern Africa and western Asia. There are 18 subspecies. It feeds on seeds and insects. It can be kept as a pet.
Posted by Nasia at 22:32 No comments: 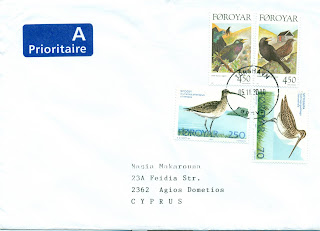 I am starting 2011 with a cover from the Faroe Islands. The above row of stamps is a full set issued in 1998 while the bellow row comes from a set of three issued in 1977.
European or Common Starling (Stumus vulgaris): This species are located in western Asia and temperate Europe. Some of the northeastern populations migrate south and west. It has 12 subspecies one of which, Sturnus vulgaris faroensis, can be found in the Faroe Islands. As a result I believe this is the bird shown on the stamp. It eats mostly insects but it can also eat seeds, nectar, grain and fruit.
Common or Eurasian Blackbird (Turdus merula): It can be found in Asia, Europe, North Africa and as the bird above it has been introdused to New Zealand and Australia. Depending on the area it lives it can be migratory or non-migratory. It eats berries, fruit, insects and earthworms. It has 15 subspecies. In the Faroe Islands lives Turdus merula merula.
Whimbrel (Numenius phaeopus): This wader can be found in Asia, Europe and subarctic North America. It has four subspecies and it is migratory. It eats small invertebrates and small crabs.
Common Snipe (Gallinago gallinago): It has already presented in the past.
Posted by Nasia at 19:39 1 comment: 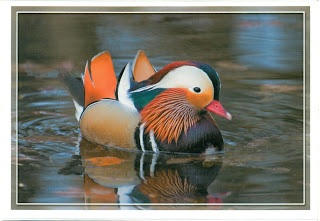 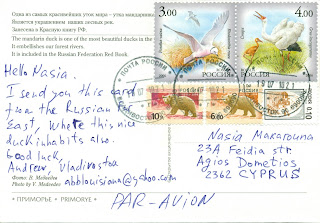 Thank you Andrew for this postcard from Russia. Both bird stamps used were issued in 2006.
Ross's Gull (Rhodostethia rosea): This small gull, which is named after the British explorer James Clark Ross, can be found in arctic north part of North America and in northeast Siberia. It migrates south but on a short distance. It can eat any small prey.
Siberian Crane or Snow Crane (Grus leucogeranus): It can be found in wetlands in arctic Russia and western Siberia. It migrates in China, Iran and India. It eats aquatic plants. It is classified as critical.
Posted by Nasia at 20:53 2 comments: 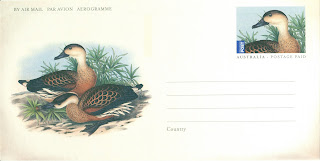 Thank you Jemma for this aerogamme from Australia.
Wandering Whistling-duck (Dendrocygna arcuata): This whistling duck can be found in subtropical and tropical Australia, in the Pacific Islands, Indonesia, Philippines and Papua New Guinea. It has three subspecies. It is classified as least concerned and it feeds on grass, waterlillies, water plants, aquatic vertebrates and insects. It is a migratory species.
Posted by Nasia at 20:34 No comments: 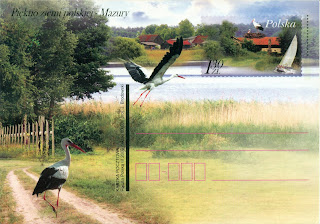 Merry Christmas to everyone! Here is a pre-paid card from Poland. It was issued in 2006 and it is part of a series showing the beauty of this country. White Storks (Ciconia ciconia) are one of them.
Posted by Nasia at 19:57 No comments: 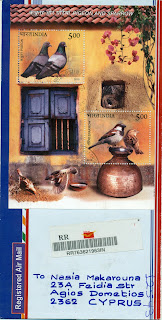 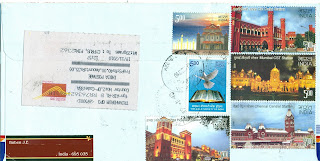 Thank you Boben for this nice registered cover from India. The m/s was released in 2010. Both the birds it shows are very common. About the Rock Pigeon you can have a look in older posts.
House Sparrow (Passer domesticus): It can be found in most of Europe and Asia. It has 12 subspecies. It feeds mostly on seeds and insects but it is also an opportunistic bird.
Posted by Nasia at 22:25 No comments: 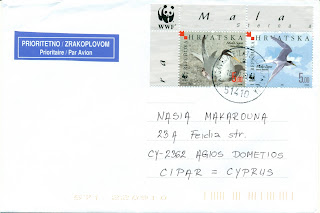 Hello everyone, for my first post in December I chose a WWF cover from Croatia. The stamps used for postage were issued in 2006 and they are a part of a set of four. The whole set is devoted in Little Tern (Sterna albifrons) which I presented in a previous post. Thank you Dragan for the cover.
Posted by Nasia at 22:11 No comments: 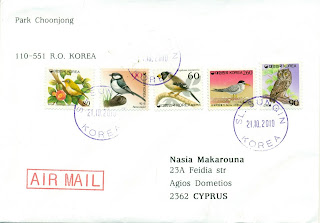 Thank you Park for this cover from South Korea. Five bird stamps are used. From left to right:
Japanese White-eye (Zosterops japonicus): The stamp was issued in 1997. It is native in East Asia but it can be found in other countries as a pet. It was also introduced to Hawaii. It feeds on insects and nectar.
Great Tit (Parus major): The stamp was released in 2006. It can be found in woodlands in the Middle East, Europe, parts of North Africa and Northern and Central Asia. It has 14 subspecies. It eats berries, seeds, spiders, insects and caterpillars.
Yellow-billed or Chinese Grosbeak (Eophona migratoria): The stamp was issued in 2002. This species of finch lives in temperate forests in Russia and Asia. It has two subspecies.
Little Tern (Sterna albifrons): The stamp was released in 1994. This seabird can be found in the tropical and temperate coasts and inland waterways of Asia and Europe. In the winter it migrates to the tropical and subtropical oceans so then it can be found even in Australia and South Africa. There are three subspecies. It feeds on fish.
Scops Owl (Otus scops): The stamp was released in 1993. I have presented this species in the past.
Posted by Nasia at 21:50 No comments: 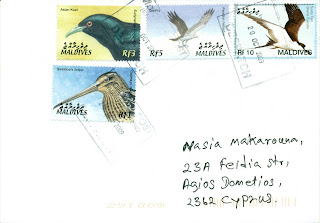 Nasia
Hello! I am bird stamp collector from Cyprus. I am looking to exchange covers from all over the world so if you are interested write me at: nasia28292@hotmail.com